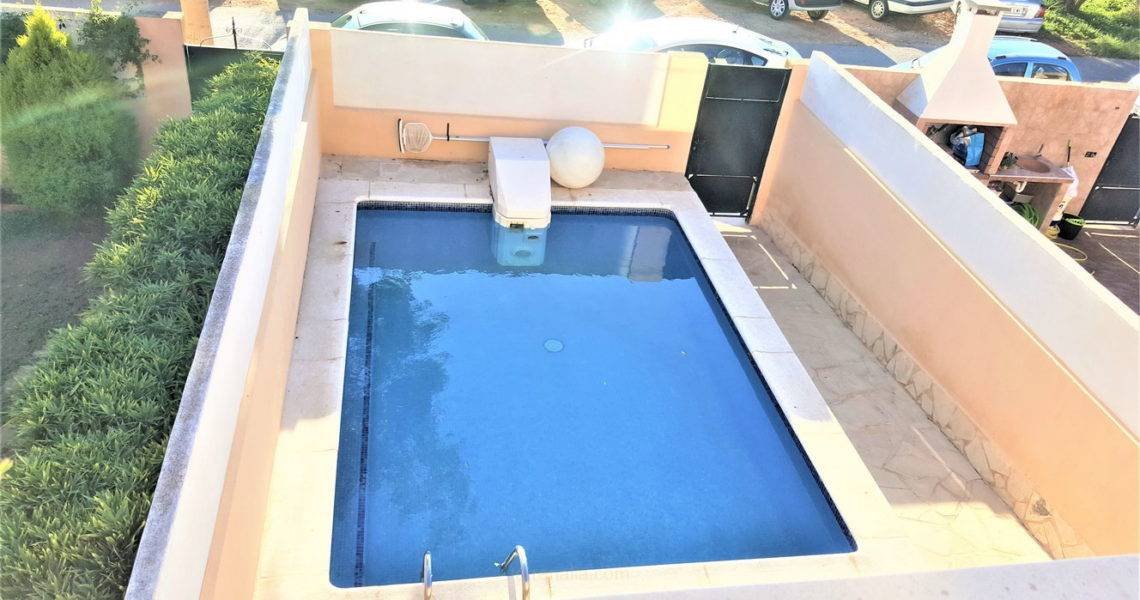 Beautiful Triplex paired in Ibiza with Pool.
This nice paired Triplex of 160m2, in Es Viver Ibiza. It is located in a quiet residential area. The neighborhood of Es Viver has a multitude of services at your disposal, health center, sports complex, shops, etc. In addition to having the beach a few meters.

Although agrarian activities had until recently been the basis of the economy of Ibiza, starting in 1960, the year in which the so-called boom in tourism took place, a new orientation was given to the economy of Pitiusa, transforming the agrarian structure into a structure of services: a multitude of hotels and apartments are built, and the Pitiusas pass to become one of the main centers of tourist attraction in the Mediterranean. This phenomenon of uncontrolled construction has come to cause real ecological disasters, which has forced to modify the current legislation on buildings.

The hippies were a very important claim for tourism. In the photo, meeting of drums on the beach of Benirràs.
Tourists who come to Ibiza and Formentera come, mainly, in search of sun and nightlife. Not surprisingly, in the Pitiusas are concentrated many paradisiacal beaches and coves (many of them awarded with the distinctive blue flag, awarded by the European Economic Community), plus some of the most important clubs in Europe.
However, as always, it is good to use but not abuse: this fame of freedom enjoyed by the island (from the 60s, when Ibiza was the birthplace of Hippies from all over Europe) has spread throughout the world and it has been distorted until it reaches ridiculous extremes. In any case, the charm of these islands is undeniable, largely due to the cosmopolitan atmosphere that is breathed throughout the year.

The islands of Ibiza and Formentera, and their islets, with satellite view.
Currently, in the Greater Pitiusa are registered about 130,000 inhabitants, of which about 40,000 live in the capital of the island, Ibiza city. The average annual temperature varies between 14 and 21 degrees, with 17’3 on average in the case of Ibiza, while Formentera enjoys an average annual temperature of 19’2oC. The amount of rainfall is only 345.4 mm with 24.6 days of rain per year.